20 YEARS ago this month, the Museo de Guggenheim Bilbao opened on the banks of the Nervión river. The jaw-dropping Frank Gehry designed building has become one of the defining works of modern architecture of the turn of the century, revolutionising Bilbao’s tourism and economy in the process.

Its architect became a global celebrity. Gehry even appeared in The Simpsons when Marge Simpson wrote him a letter asking if he would design a concert hall in Springfield.

20 years ago Bilbao certainly wasn’t considered the sexy and stylish destination it proudly is today. Locals refer to it as the ‘Botxo’ (Hole), as it is situated in a dip in the Basque hills, but it was also considered to be a rather drab industrial town – essentially, a bit of a hole!

The tourists and money flocked to its smaller but cooler Basque cousin 100 kilometres to the east; the postcard pretty coastal town of San Sebastián with its 17 Michelin star restaurants, gorgeous beaches, world-famous pinxhos, most expensive property in Spain and a prestigious film festival attracting Hollywood royalty.

But Bilbao has completely transformed. I visited in late September 2017 and I strongly disagree with a negative assessment in the 2009 edition of Lonely Planet Spain that calls Bilbao “physically a rather ugly town.”

Bilbao has much more atmosphere and ambience than the moneyed San Sebastián. In 2014, The Economist reported: “Visitors’ spending in Bilbao in the first three years after the museum opened raised over €100 million ($110m) in taxes for the regional government, enough to recoup the construction costs and leave something over. Last year more than one million  people visited the museum, at least half of them from abroad. This was the third-highest number ever, so the building continues to attract visitors even though the collection on display is modest. Other cities without historic cultural centres now look to Bilbao as a model for what vision and imagination can achieve.” 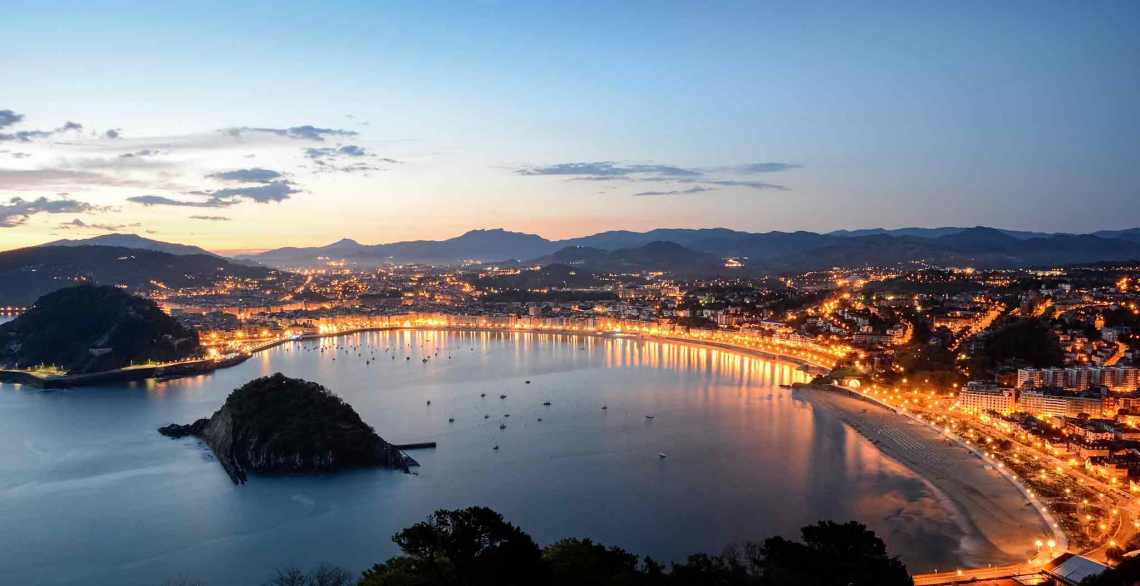 The Observer recently ran an excellent feature on how the Guggenheim transformed a town marred by Basque separatist terrorism and a down at heel reputation. Indeed, the police foiled a plot to kill the King and Queen of Spain at the opening ceremony as ETA terrorists hid in Jeff Koons giant floral puppy.

So much has changed in the space of two decades. The Guggenheim is now always mentioned whenever a large-scale project is proposed anywhere in the world that hopes to transform a town or region. For example, the Guggenheim was cited when plans for Dún Laoghaire’s Carlisle Pier by internationally renowned Grand Canal/Bord Gáis Theatre architect Daniel Libeskind were announced in 2002.

The Guggenheim marks its 20th birthday with a terrific retrospective by American artist Bill Viola, whose huge installations, projections and films find a perfect home in the cavernous rooms of one of the world’s best modern art museums.

Viola is a superb choice for its birthday. When he was just 6 years old, he fell into a lake all the way to the bottom. To Viola, it seemed like paradise and left a lasting impression. “There’s more than just the surface of life.” Viola says in this short documentary. “The real things are under the surface.”

While most of the foodie plaudits go to the seaside tourist magnet of San Sebastián, I thought Bilbao was just as impressive.

La Vina Del Ensanche is an extremely charming bar, restaurant and deli opposite the library near Plaza Moyua. You can elbow your way to the bar for a cheap pinxho such as their famous tomato and Iberian ham toast, and wash it down with a divine glass of oaky Rioja. You can also sit down for a more formal tasting or a la carte menu, or grab some takeaway delicacies in the deli.

I also highly recommend strolling along the river from the Guggenheim to Plaza Nueva, where you can soak up the atmosphere of some of the oldest traditional bars in Bilbao.

Atletic Bilbao are much more than a club, but a cultural institution that only sign Basque players in a La Liga era dominated by those billion dollar behemoths in Barcelona and Madrid. Their nickname is Los Leones (The Lions) because their original stadium was built near a church called San Mamés (Saint Mammes) after a Christian martyr thrown to the lions by the Romans. Since the 1920s, they’ve competed for local bragging rights in the Basque derby with Real Sociedad in San Sebastián, who abandoned a Basque only player policy when they signed Irish international John Aldridge from Liverpool.

Aer Lingus fly to Bilbao from about €58 each way. The airport is easily accessible with a great bus service to the city centre and back for only €1.45 each way.

Where to hang your hat

According to Tripadvisor, the travellers pick for the best combination of luxury, location and value is NH Collection Villa de Bilbao, which is perfectly located on Gran Via. The airport bus stops nearby and most of Bilbao’s attractions are within easy walking distance as it is a very compact city. The rooms are huge for the price with snazzy capsule coffee machines to brew a reviving morning espresso.  The mini bar prices are typically extortionate, but there’s a supermarket around the corner for picking up water and local beer to chill in the fridge.