“We are very pleased to be in Ireland. Cobh was a lovely place, and from what I have seen of Dún Laoghaire (he had some trouble pronouncing both names) it seems to be a beautiful spot.”

Laurel and Hardy are the most iconic comedy duo of all time. Stephen Fry considers them to be “a constant joy”, while comedian Matt Lucas enthuses, “I always thought of them as friends.”

During their later years, Stan and Ollie stayed at the Royal Marine Hotel, Dún Laoghaire; a landmark hotel in south Dublin coastal town that famously served Queen Victoria a 16-course breakfast in 1900.

Their lengthy sojourn at the Royal Marine lasted 33 nights from September 9 to October 13 in 1953. They arrived by boat to Cobh, Co. Cork from New York. Even though Cobh was supposed to be a low key visit, the church bells chimed the melody of their theme tune, Dance of the Cuckoos, reportedly moving them to tears. The comedians then traveled to Blarney Castle kiss the Blarney Stone with their wives! Olly reluctantly gave up the idea. “Nobody could hold me, I’m too big,” quipped the 23-stone actor in The Irish Times feature quoted above.

The writer Hugh Leonard later wrote: “My mother, attracted by a crowd outside St Michael’s Church in Dún Laoghaire, discovered two gentlemen – one corpulent and twiddling his tie, the other simpering and ruffling his quiff. I do not think I could love anyone who thought that Laurel and Hardy were merely ‘silly’.” When Leonard died in 2009, Laurel & Hardy films were among the gifts brought to the altar at his funeral mass.

Laurel and Hardy met with a scriptwriter a few days after their arrival in Dún Laoghaire and began working on a new production with a full cast in the Olympia. “We are thinking of calling it Birds of a Feather but we may change that title,” Stan told The Irish Times. “We will be appearing in Belfast but I do not know about Dublin yet.”

It transpired Birds of a Feather was to be their swan song, as Oliver Hardy had a heart attack and suffered from a variety of health problems from 1954 until his death in 1957.

Stan Laurel had a longer innings and died in February 1965, four days after suffering a heart attack. A few minutes before his death, Laurel told a nurse he’d like to go skiing. The nurse said she didn’t know he was a skier. “I am not,” Laurel retorted. “But I’d rather be doing that than this.”

A comedian until his dying breath, Laurel had quipped a few years beforehand, “If anyone at my funeral has a long face, I’ll never speak to him again.”

The duo were featured on Peter Blake’s cover of the 1967 album Beatles’ album, Sgt. Pepper’s Lonely Hearts Club Band, which is fifty years old this year.

We will explore another fascinating connection between Dún Laoghaire and the record that music scholar David Scott Kastan called “the most important and influential rock and roll album ever recorded” very soon. 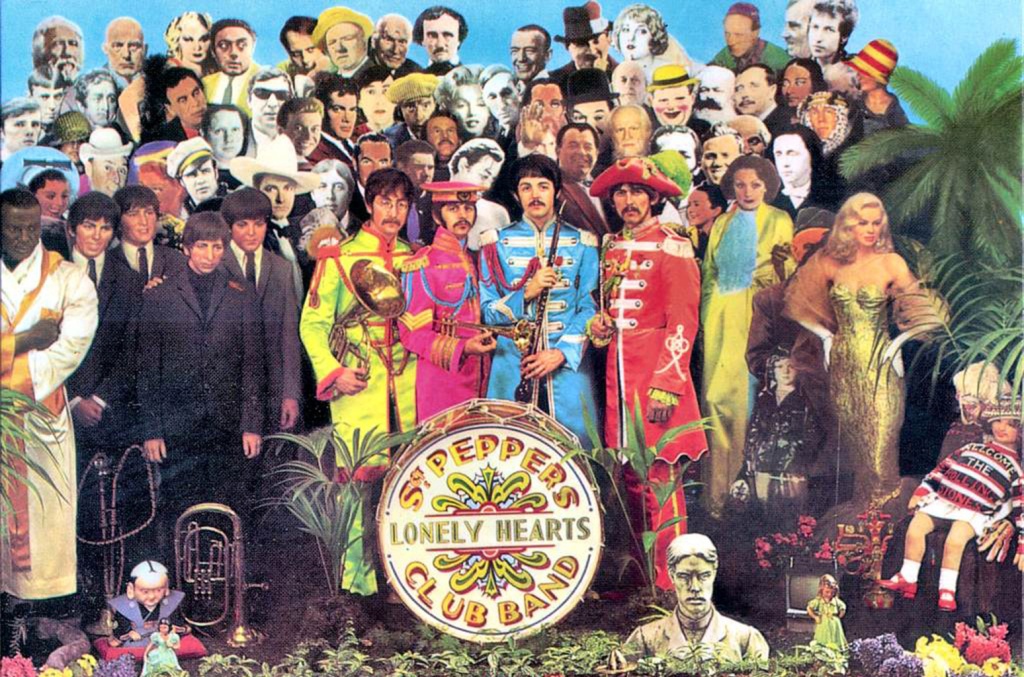