While it is virtually impossible to verify any ghost story, they’re undeniably irresistible. Intriguingly, the few ghostly yarns I’ve heard about Dún Laoghaire involve Monkstown; namely the Castle and ‘Gamble’s Hill’, Carrickbrennan cemetery and Seapoint. Seeing as it is the week of All Soul’s Day and Halloween, I thought I’d share what I’ve heard.

Widow Gamble is one of the more persistent – and terrifying – ghost stories about the area. The bar beside the Purty Kitchen used to be called Widow Gambols. Gamble herself has been associated with the old Sign of the Ship tavern in Blackrock in the late 18th century, which was believed to hold a ball room. It would’ve been located roughly where the Bank of Ireland in Blackrock is today. 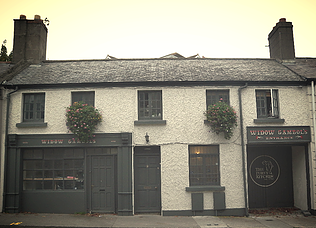 Widow Gamble’s stomping ground is reputed to be around Monkstown Castle. One version is she informed on a group of monks hiding from Cromwell’s troops, who were subsequently was arrested and executed. Local people are said to have seen her apparition both on the hill and Carrickbrennan graveyard. It is claimed she holds a large key in one hand and an axe in the other.

Another story goes Widow Gamble confronted a rich lady with the chilling curse, ‘May your next child have a pig’s head,’ when she refused her alms. Her next child’s head changed to a pig’s head a few days after the birth. The woman sent one of her servants to poison the Widow Gamble, and her ghost began to roam the hill.

I’ve also heard of paranormal activity on the seafront at Seapoint near where the Rochdale ship perished in 1807. I’ve been shown photographs of ghostly figures on the seafront. Again, there is no way of verifying this, but given that 296 people lost their lives in this sea tragedy that led to the construction of an asylum harbour at Dún Laoghaire, there could be something in it.