This Friday sees the release of Skeleton Tree; the sixteenth album by Nick Cave & The Bad Seeds. It will be accompanied by the release of the Andrew Dominick directed film One More Time With Feeling on Thursday night. This is an interview originally published in Foggy Notions magazine for the first Grinderman album.

Even though Grinderman are a new band, Warren, Jim and Martyn have accompanied Cave as his solo backing band for years, and they’re all full card-carrying members of the Bad Seeds.

Grinderman had a lot of fun making this record. “We did, but the thing is the word ‘fun’ seems to suggest we just went in there and fucked around,” adds Cave. “It was anything but that. We took the record very seriously and gave it our very best shot. An enormous amount of thought went into it.”

Given that the band are scattered all around Europe and Australia, it’s understandable that their time together has to be productive. “Oh, it’s not too hard,” Cave chuckles. “Martyn, you’re quite used to that Perth-London flight by now, aren’t you?”

“Yes, Nick,” Casey laughs “Like anyone else, I adore travelling alone and clocking up air-miles I never get a chance to use. I don’t mind all the travelling really, as I live in Western Australia and it’s just so isolated. Actually, the only good thing about living there is getting away from it for a while.”

“Really Marty?” Cave interjects. “I went back for a month and it took quite a bit of re-adjusting when I got back here. I hadn’t been home for that length of time for ages, so it was long enough to make me realise that Australia is a great country, while England is a miserable dump. Do you know that England is the 41st happiest country in the world? Well, Australia is number one. There’s a bit of completely useless information for your piece. So anyway, edit all that. Apart from the bit about England, of course.”

Australia is a great country, while England is a miserable dump. – Nick Cave

Grinderman are set to make their live debut at the All Tomorrow’s Festival they’re curating.”One of the things for All Tomorrow’s Parties and Grinderman is to see if we can do something that’s convincing enough to perform more,” Warren says. “There is a time limit on this because Nick has started writing the next Bad Seeds record.”

Nick: “Fifteen-minute guitar solo at the end of Grinderman.” (Everyone laughs)

Warren: “Fireworks. And then we’ll release a few hundred monkeys into the audience without leashes.” 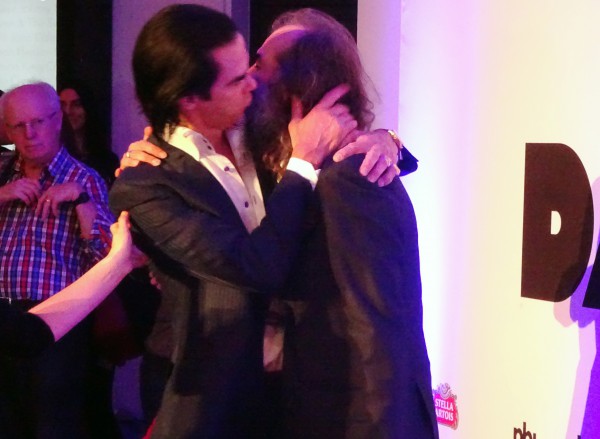 The afternoon is peppered with such exchanges, with Cave at one point asking, “Warren, what the fuck are you talking about?”, while later complimenting his audio loops by saying, “I don’t think I’ve ever told you that, darling.”

“This is completely a different way to write,” Cave says. “I get a lot of pleasure sitting on my own and playing around with words. I guess there are certain types of songs that I can’t write on my own. I imagine them but just up in my head. I don’t remember stuff as well as I used to. I could always remember melodies and what I wrote on the piano on a given day, but I don’t have that same capacity anymore. It’s good to go in and get stuff down on tape. I don’t do that in the office. I might get one of those cassette recorders you have. What are they called again?”

“Warren, what the fuck are you talking about? – Nick Cave

Scott Walker claims recording is his favourite part of the process. “I completely agree with that,” Cave agrees. “The recording process is an incredible relief because generally with Grinderman and the Bad Seeds you see these things coming out and sounding brilliant, but when you’re on your own, and I assume he (Walker) works on his own, you just don’t know what the fuck you’re doing. I get a huge amount of anxiety over it. You just don’t know if what you’re doing is any good or not.”

While the Grinderman men are fully embracing their new-found raw incarnation, they don’t spend their time perpetually jamming. “George Clinton is full on,” Cave reveals. “He’d play during the day, and then go into whatever town he has to do a gig. I saw one of his gigs and it’s fucking three hours long or something like that. We walk in and its like ‘Nick Cave is in the house!’ and he is standing there with a bunch of maracas. At two in the morning, I went back and asked what he was doing later, and he goes, ‘We’re going to the studio and fucking jam for a few hours’, while his manager was rubbing his shoulders.”

The Bad Seeds or Grinderman certainly don’t seem to be slouches.”Well, I’m greatly looking forward to the Grinderman greatest hits album,” Cave concludes. “We’ve stumbled on a way of making more records that I’ve always seen as a bit of a problem because of the time it takes to record and manufacture a record and get it out is far too slow for the creative impulse, so there will be two more Grinderman albums and a Bad Seeds one before Christmas.”